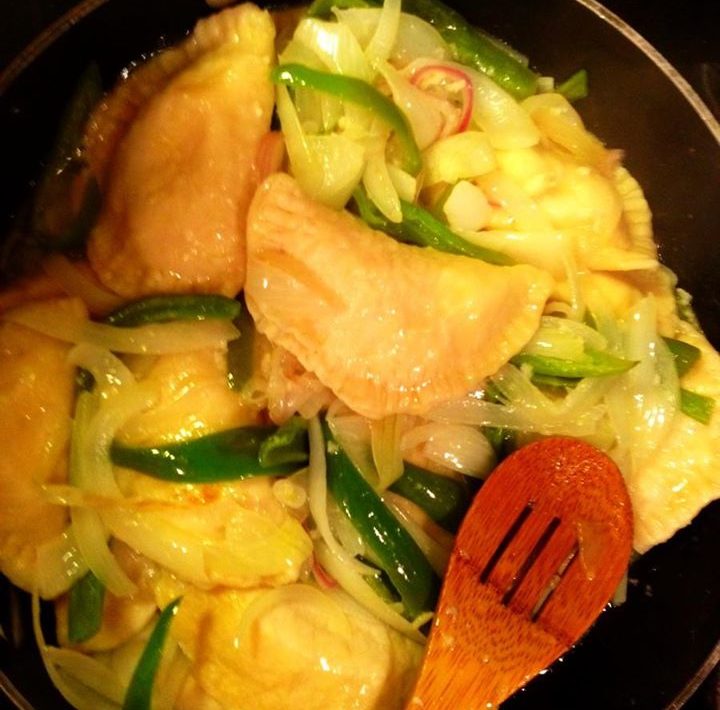 I was on a pierogi quest for years: seeking the right one, then deciding to make the right one. Here is my recipe and if I do say so myself, it is really close to perfection!

This isn’t something you whip together after you get home from work, though. This is pasta making, then giant batch potato making. Really, you’re gonna want a nap afterwards.. if for no other reason than: these things are loaded with carbohydrates!

Note to Reader: My recipes don’t factor in your health or health issues at all. I’m going for flavor, satisfaction, and ability to feed the masses. I generally make enough to feed two houses and freeze portions for later. So if you are wanting to make these for tonight only, get your calculator out because you have some ciphering to do!

Peel and cube your potatoes, and boil until you can mash through one with a fork (about 30 minutes).  Drain and put in a plastic bowl, then add cheese and onion powder and set aside.  (I use onion powder instead of onions in the filling to keep little pieces of onion from poking through the dough or compromising the seam.)

In a mixing bowl add your flour, sour cream, egg and water (1/4 cup at a time) and combine using a mixer with a dough hook until you have a nicely formed dough ball.

Have a sauce pan full of water (add hot water to keep it full as it evaporates), going at a rolling boil, ready to drop in each pierogi as you make it.

Pinch off and roll a ball of dough 1-1/2 inches in diameter then roll it out flat about the diameter of a hockey puck (I used a smooth heavy drinking glass, too small for a rolling pin really).  Spoon a heaping tablespoon of filling mixture into the center of the dough, then pull the sides of the dough into a crescent shape and pinch them closed, making sure there is no potato mixture in the seams.  Then make a solid seal around your cresent edges, by pressing the tines of a fork around (like a pie crust).  Drop the pierogi in your boiling water and start on your next one.  You won’t remove the pierogi from the boiling water until it floats, so you have time to make one or two more before that happens.  When it does float, pick it out of the water with a slotted spoon and place it on a plate that has been sprayed with cooking spray (very important because they will stick to the plate and each other).  If you have to stack them, put a piece of wax paper between the layers, also sprayed with cooking oil.

When all your pierogies have been made and boiled, you are ready to pan sear them.

In a skillet heat 2 sticks of butter on low heat until melted, then add 2 sliced onions (I use 2 or 3 different varieties), and a half dozen mildly hot long green peppers, de-seeded and sliced in strips.  Place a lid on the skillet for about ten minutes.  When the veggies are somewhat soft, remove the lid and place your pierogies on top of them.  Turn your heat up to med-high and stir fry till everything is evenly seared.