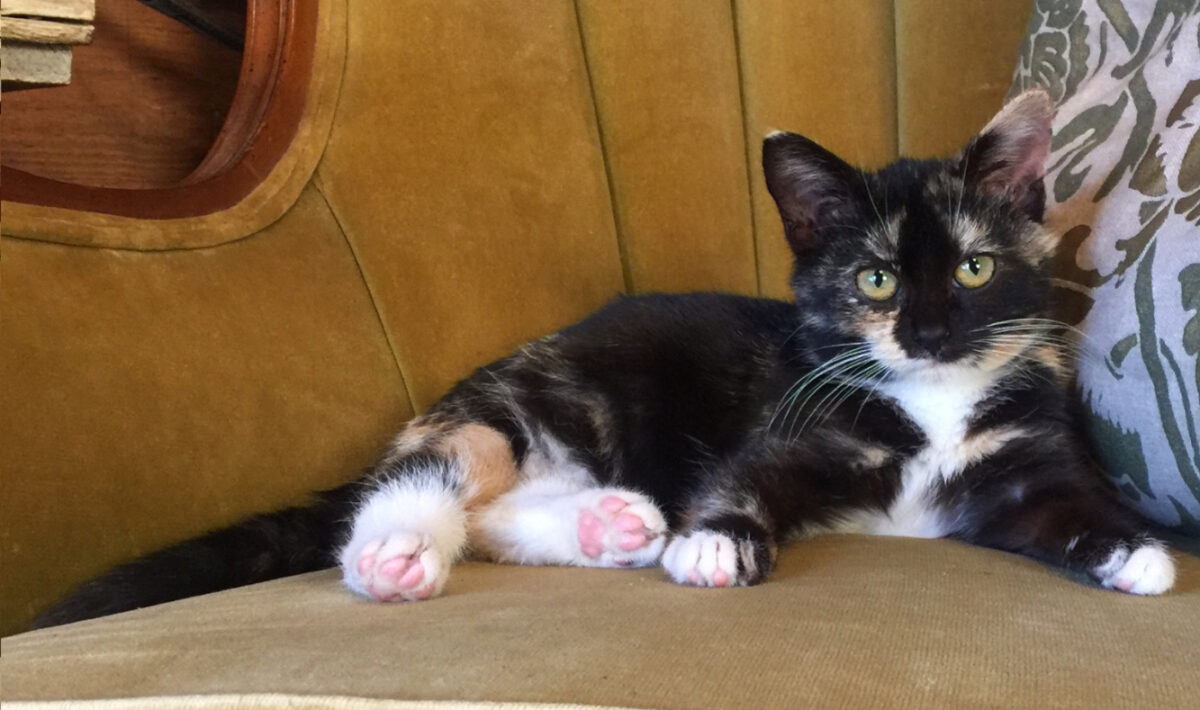 Please welcome Frankie, the newest member of our family.

She started out as “Shelley” because she is a tortoiseshell kitteh and has a franken-leg (and part of the other) from an orange tabby.

That may actually make her a torbie, I’m not sure.. but isn’t she precious?!

We soon realized that while giving a nod to Mary, “Shelley” was too close to my name; and Kenny, having recently entered his sixties, needs all the simplicity he can get!

I can already tell you, that she is far too fiendish to be a “Shelley” anyway. Frankie is a perfect fit!

Frankie the tiny steiny came into our lives this past Saturday night, when she was cornered in the back yard by Ziggy: now a full grown German Shepherd.

Kenny saved her from Ziggy then handed her off to me.

It’s so cute how Kenny had no idea at the exact second of the hand-off, that we instantly had a new kitteh!

As he was arguing that he didn’t have a new cat, Frankie was fluffing up his shoulder for a nap. Adorable! ?

And so helpful to give him a little massage to help him de-stress from his sudden onset of unnecessary fear and delusion. Calm down.. here, pet a kitty! ?

A little background so you can understand our magical kitty windfall:

Frankie’s mother is a wild stray tortie that has been hanging out under our carport, dubbed “Spooky” by Kenny. Kenny didn’t want Spooky going hungry as the weather grew colder, so he started feeding her last Fall. Today, for the very first time, she allowed Kenny to pet her… this, after months of maintaining at least a yard of distance and streaking away if he moved any closer.

I think she was thanking him for taking in her baby, knowing we will give her a good life. As soon as possible, he will try to get Spooky contained, and take her to be spayed.

In short: Kenny has to be happy with the new kitty, because it’s a gift to him from the stray he’s been caring for outside. Don’t look a gift-cat in the mouth!

A trip to the vet this morning let us know that Frankie is approximately two months old and has a bit of an upper respiratory infection. So she’s on ten days of meds twice a day and hanging out with me in my studio, while being litter box trained.

In the studio, she prefers to sleep in the half-dead aloe vera plant.

Is she attracted to the exiting life-force, as some reported grim reaper cats in nursing homes? Or is she just moving in on a plant, understanding the bulk of work towards its demise, is halfway done.. a fixer upper, if you will.

Potayto/patahto.. chicken/egg… farewell green friend.. there are other worlds than these! (TOTAL Dark Tower reference! ?)

Cats trump plants.. everyone knows this.

Efforts towards another sum, only result in a complete breakdown of a happy, stress-free home.

Have you ever tried to scritch a Christmas tree between the ears?

She also seems to be into my current music selections by The Clash as I work in the studio.

Tip: If you have never listened to the first album by The Clash called.. The Clash? You wanna get on that right away, because it’s their best and full of energy!

Within two weeks, Frankie Lagniappe owns the house! Here she is again, hanging out with me in my studio.

One Reply to “Say Hello To Our Little Friend!”