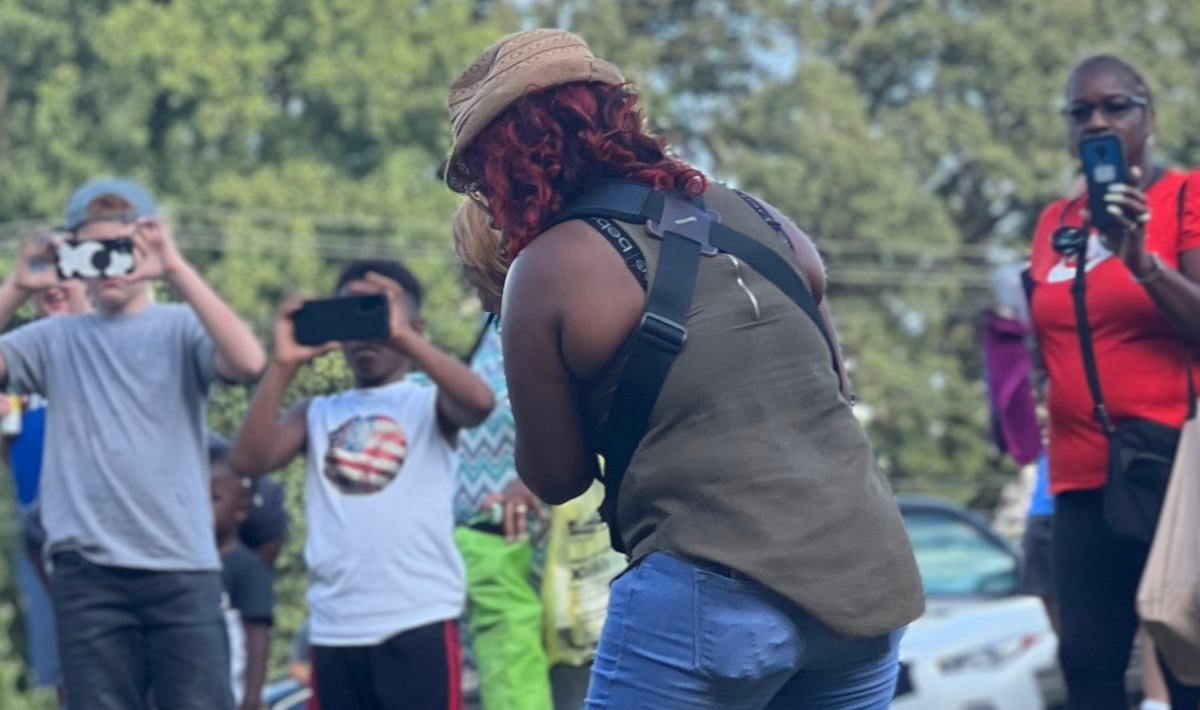 Egads! Here I am a month after I first went missing for six weeks. Silly Segue: Can you tell I am a child of the Sunday funnies? GADZOOKS!

No, I wasn’t abducted by aliens (you do know I am KIDDING, right?), yet completely overcome by really good music! Here in Coldwater!

The G.O.A.T. PICNIC and The Rising Stars Fife and Drum Band, to be precise!

Our friends, Melanie and Robin, flew here from Austin, Texas, specifically to go to the G.O.A.T. PICNIC. And when Melanie, mentioned six months ago that this festival would be happening in Coldwater, I was like: Are you SURE it’s in Coldwater? 😬

So first off I wondered where was this festival going to be? The Square? The field where they do Trade Days? Then Melanie started telling me about the African roots of fife and drum blues or, Hill Country Blues, and how Otha Turner brought it into mainstream. And then I’m like… you mean like Yankee Doodle? Otha who? Hill Country Blues? I don’t like country music, Melanie.. I mean I know you are probably in the center of it in Austin, but… I don’t know if it’s for me.

I was so sure this just wasn’t going to be my thing, I started thinking of all the reasons I couldn’t spend two hot Summer days in a field listening to reed flutes and drums.. and I didn’t pay much attention to the link Melanie sent me of the Tedx Talks video with Sharde’ Thomas: granddaughter of Otha Turner.. because I was all… oh, this was filmed at Ole Miss? Geaux Tigers! ⚜️🐅💜

Fun Fact: Kenny attended Ole Miss when he was a young man, so he and I equally represent Ole Miss vs. LSU, “respectfully”. 😂

This means that you don’t have to be angry with me if you are an Ole Miss fan because Kenny cancels any favors I may have with the football gods.

Also.. that corndog inside a lasso trap thing Ole Miss fans do against LSU fans is just… weird. And isn’t Pronto Pup based out of Mississippi? It seems like it since I see one of their trailers at most events I’ve attended in Mississippi. I don’t eat corndogs that often but have had way more in this state than ever… but I digress.

I did start the video .. if you can call watching about a minute, starting anything. But someone called or came by and I am very easily distracted, so I never went back to it. 🐿️

Then as the days grew closer, I started dreading them, remembering how Melanie once convinced me and Kenny to go to a Brave Combo concert with her at The Hi-Tone Cafe in Memphis. And how it was heavy metal polka.. and that it was fun, and we danced in the streets and all, but would I buy their CD? And at one time they were headlined by Tiny Tim.. WTF? And how I don’t even like to listen to the radio.. and pretty much prefer to listen to The Beatles, Pink Floyd, David Bowie, Amy Winehouse and Prince on repeat. That the only “new” band I even like is Arcade Fire and their last album didn’t even blow me away; proving to me that any new music shouldn’t be entertained because there is nothing new under the sun, and everyone auto-tunes these days anyway.

I further convinced myself that Melanie likes to do random, weird things because she is an extrovert, and this would be something that I would definitely not enjoy.

The evening approached and I dragged myself to the Shriner’s building, not realizing that anything ever happened there. And there were maybe twenty people in a field, where Melanie and Robin had urged us to arrive early for good seating.

Yeah.. I am gonna hate this!

Then Sharde’ Thomas came out with her drum and fife, leading The Rising Stars Fife and Drum Band, engaging and energizing the growing crowd. I was caught completely off guard.. holy sh:t, am I enjoying myself away from home?

And even though I don’t like festivals because of the crowds that come with them, I have a really good ear for music.. and started thinking… isn’t this Irish music? It seems like I have heard something like this before.. and I had: in the opening sequence battle scene in the Scorsese movie, Gangs of New York. Except the performers weren’t Irish or even ye olde New Yorkers, it was Otha Turner and The Rising Star Fife and Drum Band. Specifically, “Shimmy She Wobble” from their album “Everybody Hollerin’ Goat!”.

I guess it’s not cultural appropriation if the musicians were paid for their music… to represent an Irish gang of Robin Hoodish thugs.. but it still feels off to me. No doubt, from my own cringey reaction.

And there’s this buzz in the crowd the first night about when Luther Dickinson comes later.. that he’s really good and he played with John Hiatt, and The Black Crowes. Oh okay, yeah, I really like John Hiatt because I love great writing.. and I like that Hard to Handle song.. not so much the She Talks to Angels though.

And in between the sets, The Rising Stars would walk through the crowd with more fife and drum music that got everyone really going!

Luther Dickinson arrived and performed a really great set, ending with Lamar Williams, Jr. (son of Lamar Williams, performer and bassist of The Allman Brothers Band and Sea Level) and Sharde’ joining him on vocals with fife, with the beat kept by The Rising Stars on drums; all knocking it right out of the park!

By the middle of the night, I am invested in and worried about the future of this festival.. that’s in its 74th year.

But “I” barely found out where it was, a mile from my house. Something this amazing at least needs a website.. and that’s what I do!

So I found Sharde’ selling t-shirts in the Shriner building and told her I wanted to build them a website. And I have a great start on it, which I am very proud of at: goatpicnic.com

It took me a minute to get my bearings straight about the history of it all, but I think I am getting it together.

The Rising Stars are amazing! And their gift must be shared.. the G.O.A.T. PICNIC must be promoted!.. But not too much.. because I really love the close family feel of it, as it was this year.

There’s nothing like it! Kids running around playing and dancing on the field.. SAFE.. free to be little kids, like it was when I was a little kid! I didn’t know that existed anymore.

People basking in the country air and cacophony of crickets, while enjoying great music and eating the best fried chicken of your life (and I can fry the hell out of a whole chicken I cut up, myself.. because my dad was among many things.. a butcher! – but I digress). The chicken was so good I had it both nights! Next time I will tear myself away for some tacos for at least one night. Nothing against goat.. but.. I will have to work myself up to holler for it.

If you couldn’t tell by now: as a rule, I am adverse to new experiences.

Something tells me the G.O.A.T. PICNIC is gonna end up being a really big event and I am seeing its last days within a thin crowd. That makes me simultaneously excited and sad. It’s just too charming and beautiful to be kept a secret.

The second night, I gained a band to throw into my pile of new favorites: Johnny in the Basement, out of Long Island. They began with blues and jazz fusion that grabbed everyone’s attention. They were killing it on “Whipping Post” when the electronics suddenly went out. Didn’t matter! The drummer (whose name I can’t find) made me feel like I was inside the drum finale scene in the movie Whiplash, bridging the gap until someone ran into the Shriner’s building, and threw the breaker. Then JitB were joined in an encore performance by Robert Kimbrough, Sr., son of blues legend, Junior Kimbrough, and a legendary blues man himself.

This all happened after hearing the naturally talented Dr. David Evans perform after Sharde’ introduced him with a special dedication. Dr. Evans is one of the most important contemporary blues musicologists and academics, author of the seminal traditional folk blues history “Big Road Blues-Tradition and Creativity in the Folk Blues“, recipient of the Fulbright award, holding degrees from Harvard and the University of California, Los Angeles, and author of “The NPR Curious Listener’s Guide to the Blues” and other publications.

Pinch me.. is this even real?! What did I just witness? In Coldwater?!

Yes Coldwater.. Where JitB completed an album that week, produced by Luther Dickinson at his recording studio, Zebra Ranch Studio!

A lot of people.. just not my ignorant self! For like nearly a century now, because 2022 was the 72nd Annual G.O.A.T. PICNIC.. and they were down for a couple of years due to Covid.

I really should get out of the house more!

Especially in Coldwater.. I’ve been living here now for five years and love it more everyday.

From then to now, The Rising Stars Fife and Drum Band have been playing all over: at blues festivals throughout Mississippi and were in Austin last weekend.. where my pals Melanie and Robin partook back home, and said hello to Sharde’! She took a photo with them and gave a shout out from the stage.

So damn cool, that I am going to close this post right here, because it can’t get any better!

Except to say: THANKS MELANIE! You were RIGHT!

ALSO: While in the drive-thru line of the new Whataburger in Southaven today, we heard a kitten in distress, that turned out to be two! Kenny rescued a duo of tiny kittens from the skid plate of a car in the lane beside us. They had ridden for 70 miles before the lady got in line at Whataburger and realized she had a couple of stowaways. No worries, they were safe, sound, and scrappy!

Between three and four weeks old, they were too young to leave their kitty mom, back home; but Kenny went back to give her our information, and said she will give us one of the rescued, after they are weaned. This makes four felines Kenny has saved in the past two years. MY HERO! ❤️

UPDATE: The lady’s husband from the Whataburger Kittens called Kenny and told him the kittens made it home safe and are happily running around.. and that we can have one of the two he rescued. The new kitty should be weaned and ready to go, in four to five weeks. YES! 😻 We are going to have a new family member in about a month!

Frankie will be so happy to finally share the house with a pet other than our two geriatric Pekingese, Moosh & Pop! Kenny and I both agree that we would love to have the one with the orange-ish face, which was the second one rescued from the under the car. ❤️