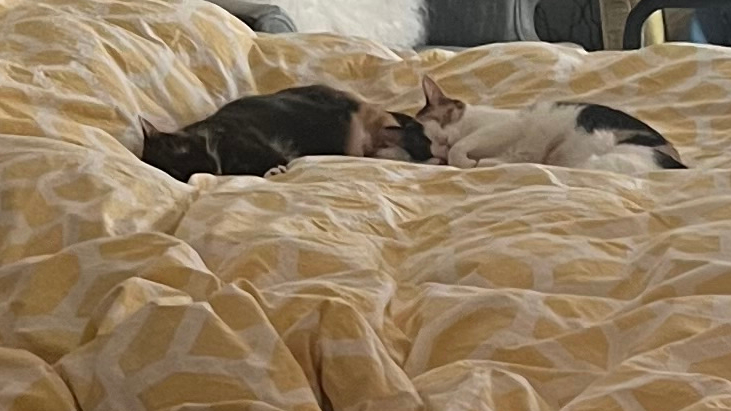 The last time I posted, I had gone missing for six weeks. This time I took off the entire season of Autumn!

I really wish I could share some Halloween, Thanksgiving or Christmas decoration photos with you this year; but like last year, Kenny and I spent the end of October in Louisiana, for my birthday. Then less than a month later, we spent a month in Florida for Thanksgiving and pet sitting for my sister, Margo, while she and her husband, Ricky, took a ten day cruise through the Caribbean. This year, my brother, Keith, from Chicago, flew down to spend Thanksgiving with us all in Florida. I had not seen Keith since the end of 1999, and Margo had never met him, so you can imagine the time we spent catching up.

While Margo was cruising, I had my fleur de lis tattoo upgraded with color. You may remember that Margo and I have the same tattoo, which honors our deceased sister, Iris; and for me, my home state of Louisiana. Our youngest brother came out to me a few years ago as transgender and I wanted to add some rainbow colors in his honor. I used the street art of Bourbon and St. Ann Streets in New Orleans as inspiration. Yellow was already represented from the prior version of my tattoo; and I switched Kelly green.. which I hate.. for chartreuse. Margo loves it and plans to add my colors to hers as well.

Kenny and I did a lot eating, shopping, touring, and chasing animals. We took a tour at Babcock Ranch Eco Tours, where we saw water birds, wild boars, and more alligators than on our 2021 swamp tour of the Florida Everglades: including “Darth Gator”, a small yet feisty juvenile alligator. We were informed that Darth Gator came from a local farm to serve as wildlife ambassador, but would be returned for a smaller version, when he exceeded three feet. That’s when my counter personality, Little Suzy, naively blurted out excited curiosity of what Darth Gator would be doing when he was returned… to be met with the cold reality that he would most certainly be showcasing in someone’s order of gator bites. 😬 Wow.. thanks for letting Little Suzy meet meat…

Turns out, we didn’t have to go too far for wildlife: Margo’s wild bunny, “B.B.”, came to me when I called her (as she does for Margo) for afternoon snacks of romaine and baby carrots; and I photographed then relocated a Florida Banded Water Snake from the backyard, at Margo’s request.

Since I returned home nine days before Christmas, I didn’t see the point in putting up trees, decorating the porch and bannisters, for a little more than a week before everything had to come down.

I could lie and say I am sorry.. but I am NOT SORRY!!! I really miss the warm Florida weather, especially now that I am freezing my tuchus off in my North Mississippi studio, as I try to summarize the last three months.

Before we left for Louisiana, we rescued a stray calico we named Celie. She was horribly malnourished, had a respiratory infection, and every type of worm that exists when she arrived. So we got her well, dewormed, vaccinated and spayed before we could let her out of quarantine. 😬 As you can see from the photo at the top of the page, she and Frankie are getting along really well! It’s so much fun to have two cats romping around the house! 😻

While I was back home in Monroe, Louisiana, the Powerball had risen to over one billion, so we bought many tickets, and visited the Bright Lamkin Easterling Home in all of its disrepair. There, I made my promise to the universe that if I won the lottery, I would buy and restore her to her former glory. We didn’t win, but perhaps someday!

Later, Kenny and I were searching for new things to do in my hometown, and I suggested we go to the local zoo. I hadn’t visited the Louisiana Purchase Gardens and Zoo since the late 1980’s. It was great to visit the zoo and see it on a comeback, with a hospitable staff who were excited about the plans they have for its future. The train I rode as a child had been rebuilt and we took a tour on it, as well as the boat, to see the full zoo grounds.

I somehow managed to not get any photos of the big cats.. which is crushing because you know how I feel about kitties!! I think I was over-preoccupied with Timmy the tiger, who swims while glaring up at you with his beautifully wild tiger eyes! ⚜️🐅💜

But before all that, the first thing we saw when entering the zoo, was a beautiful memorial built for Shirley the Elephant and her Monroe zookeeper, Solomon James. Shirley died in 2021, at the Elephant Sanctuary in Hohenwald, Tennessee; and Solomon, in March 2022, after working 35 years at the Louisiana Purchase Gardens & Zoo.

Both Shirley and Solomon were showcased in NatGeo’s 2011 documentary: The Urban Elephant: Shirley’s Story

In 2011, I toured the Elephant Sanctuary, for an article I was writing, with my BFF, Dana, as photographer. We were chased by Tarra, the world-renowned Elephant and her own BFF: a yellow lab named Bella. Afterwards, I ran into Shirley, not realizing she would be there, then experienced the most magically surreal reunion with the resident elephant of my childhood zoo. I wrote an article a month later that was published in DeSoto Magazine.

The full article can be read at: https://www.bluetoad.com/publication/?i=74301&p=20&view=issueViewer&pp=1

And I think I will close this post, on that very beautiful memory of mine. Merry Christmas! ❤️

Kenny’s birthday present arrived today! We were in Florida for a month, and when we returned home, I didn’t want it to get lost in the mail competing with last minute Christmas deliveries. Artist, Linda Berman, agreed to mail it to him after Christmas, to settle my anxiety. Check out the awesome Krampus she made, which was 1 of 10 of this size, which were all unique/one-of-a-kind pieces.

You may remember that I have posted two other Linda Berman works in our home. Obviously, we are fans! 😍